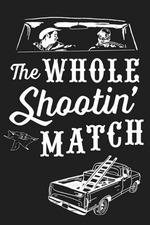 Like maybe only an amateur can, Eagle Pennell created a lived-in, fully-realized world familiar from real life but foreign to movies, and he painted this canvas in slight variation for two and one-half inimitable films, using the same two actors and practically the same locations. If you were to take Budweiser, rodeos, and baseball caps—the red state signifiers that made American Sniper so much money—and invert them into Lone Star, bar brawls, and hats advertising Big Ag, you might be able to reverse engineer Pennell's sadsack vision of America, a perspective too brutally honest and affectionate for civil society.

Pennell, like the greatest of cinephiles or just a real wingnut, changed the spelling of his name in honor of Arthur Penn and a character from She Wore A Yellow Ribbon, and while the connection to Ford is tenuous, it's there somewhere (in the bottom of a glass, no doubt). Pennell is proof that just about anyone has the material to make one great film from their real life, and his example stands as argument that some folks, once they've made that great film, should make and re-make it until the well runs dry. If you were to take one Pennell picture—this one, the best—on its own, you'd be left with a cultural artifact, but look at them altogether and they speak, reverberate, reflect, holler, and swear back at one another across the blank echoing empty dark between.

A Hell of a Note