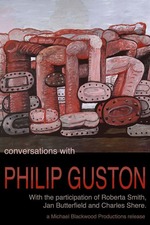 “[Walter Benjamin] uses the phrase, the importance of content–allegory–as being a corrective to art. He goes on further to say that the significance of this corrective is that it leads to two things; it leads to a discontinuity, which he claims is important.

It made me realize why, about twelve years ago or something like that, I became unhappy with what I was doing, that is, in the New York School group.

Benjamin then continues to say that without this corrective of subject, I mean actual subject of forms, however imaginative, whether imagined or not, that without this, we have, quoting Benjamin, since I've just been re-reading it, because it seemed I was, like, hungry to read this, leads to a false appearance of unity.

Since the beginning of the century, when subject matter was dispensed with, […] writers on art, and artists, have thought that subject matter got in the way […] and so it gradually lead to a reductive art, in which its main emphasis was on its means.

[Benjamin] claims that a masterwork must be a ruin. That is to say, it's flawed. I've been aware of this for years. There's something death-like about making a unity which is quickly graspable and easily consumed.

It's not given to me to know whether [a picture is] successful or not, because that's not my aim, and I wouldn't know what successful meant. I really can't say, 'that's a good picture.' The most I can say, or that's given to me to say, or that I think about, is that it's a picture that has a potentiality of leading to more.”