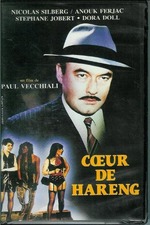 Quickly gives the lie to the "there was honor among thieves back in the days" story put forward by its framing device. That having a code shit is bunk; ego and violence reign. It's not totally pitch-black - there's solidarity and love between the women (and some of the men), a tragic love story, a sense of people having a history and even some cool underworld mannerisms - but that barely offsets the gloom. Violence constantly lurks around the sex workers of Coeur de hareng. When they wrangle what leeway they can get from their pimps to do things their way, their actions only end up as justification to get a dormant beef going again. Women used for gangster games.

Underworld rules and precedents are changed on a whim. Retribution is arbitrary. The big action scene is a sort of sham gangster trial where our protagonist is forced into a duel. Honorable cowboy shit that turns into a bloodbath. Everybody gets fucked; whether they believe in the code, pretend too or don't care. But you can afford to wax nostalgia about the good old days if you survive the lies that get others killed.

My Dread is School!, School is Dreadful! Kanako…