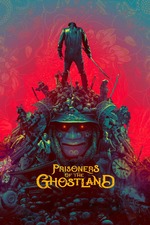 Prisoners of the Ghostland 2021

Cage has showed us over the last few years that he can do what he wants and we're just the passengers. I don't love everything he's done, nor do I subscribe to the post ironic meme-ification of a man who clearly nurtured that perception of himself.

Prisoners strikes me as a nexus point between the 2 distinct Cage identities.. it's a wacky, whacked out silly character that plays into his gonzo sense of self, whilst also leaning hard into the meme factory that comes with iconic silliness. Unfortunately I think by trying to achieve both of these things, it misses the mark on both.

I didn't care for Cage's Hero, except to appreciate that the character is a Badass with a dark past. Most other characters have less depth than that.

The film does look absolutely Gorgeous though, the repeated vibrant colours and slow motion explosions of a gumball machine reminded me of that Sony TV ad with all the bouncing balls.. indeed this is the sort of film you could leave on with the sound down to demo just how sharp your 4K OLED can get.
A vast sea of extras positively burst with energy and I particularly enjoyed their synchronised dance moves.

There is a LOT going on in this movie. Not much of it makes sense. If you have the tolerance, you will probably enjoy the visuals and the occasional kinetic action scene, so long as the oddballs and comedic gurning don't turn you off.

As I watched the film I repeatedly remembered Alex Cox presenting the BBC2 Sunday night cult cinema show Moviedrome.. A gateway to many of my generation to the odd and unhinged corners of cinema. I can easily imagine future generations discovering this oddity in a similar context. Perhaps a double bill with Tetsuo, or The Good The Bad and The Wierd, or even Escape From New York. It's aggressively strange, it's just that I think it strains too hard to achieve that forced strangeness.