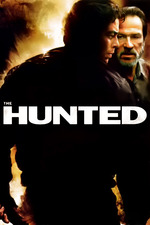 Plenty of Hollywood movies try to have it both ways, making thorny issues palatable by sublimating them to high-octane thrills. Unlike most of these, THE HUNTED actually pulls it off by virtue of finding the right balance between theme and style. Granted, the toll that being a trained expert killer takes on a mind is addressed so directly by this movie it barely qualifies as subtext, but Friedkin distinguishes it from the likes of, say, FIRST BLOOD by virtue of devoting as much time to the killer's mentor as it does to the killer himself. Early in the movie, L.T. Bonham (Tommy Lee Jones), a civilian who once trained Marines in survival and hand-to-hand combat skills, states that he's never killed a man himself, but it's clear that even his level of knowledge weighs heavily upon him, even if he's never had to actually put it to use. This goes double for Aaron Hallam (Benicio Del Toro), the ex-Marine who now finds himself unable to step out of killer mode, having been not only encouraged to kill on the field of battle but also decorated for his ability to do so.

But what really distinguishes THE HUNTED is the potency of its filmmaking. Friedkin has always excelled at car chases, but here he shows that he's equally adept at shooting the body in action. Rather than shying away from the details that are often treated as incidental to conventional action choreography, Friedkin accentuates the way Bonham and Hallam move, what it takes to get them winded, and their respective styles of fighting. As a result, the hand-to-hand combat scenes in THE HUNTED are uncommonly exciting, as Friedkin pays attention to such details as how Bonham compensates for being overmatched physically and the techniques Hallam uses to set his opponent back on his heels, at one point throwing his own blood into Bonham's face as a distraction. Sure, the part where the movie stops mid-chase to allow Bonham and Hallam time to craft their respective knives is sort of ridiculous, but the knife fight that follows is more visceral and excitingly physical than 99% of onscreen gunfights, so it seems churlish to complain. I know Friedkin has transitioned into making small-scale theatrical adaptations (like the Theater of Cruelty wank KILLER JOE), but I miss the guy who used to make movies like this.