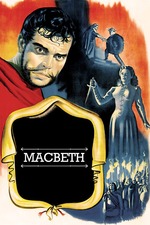 Orson Welles had massive restrictions when it came to shooting Macbeth, from its budget to its schedule. Its set premiere at Venice Film Festival was marred by comparisons to Laurence Olivier's version of Hamlet which would eventually take the festival's top prize (along with Best Picture at the Academy Awards.) Even with time, this remains one of Welles' lesser known works, less so in the shadow of Olivier, and more in that of Welles' later Shakespeare adaptations.

It speaks clearly to Welles' ability as actor and director that Macbeth works so well with so much working against it, both in its time and in the current day. Even on a supposed "off day", few could bring so much expressiveness to Shakespeare's work as a transformation toward the screen. Those more hardened Welles tropes can be forgiven as defiance of Shakespeare (not that I really care either way) by his more close reliance to the source material, a trait that might have been a requirement at some point in film history (besides the looser adaptations floating around), but is far from necessary overall. Welles' dedication to his own stylism and Shakespeare's words might not be surprising, but it's nothing if not compelling.