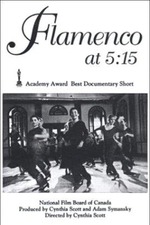 The Oscar winning short film that would garner director Cynthia Scott international praise. Nowadays Scott is best remembered for her first and final feature work, Strangers in Good Company, but her work with the National Film Board associated Studio D, dedicated to women filmmakers, would bring her earlier praise.

Scott's magnum opus celebrated the beauty of a relaxed and natural femininity, with the entire cast and much of the crew being women. Flamenco at 5:15 isn't as overt in these feminist intents, nor does it ever even address these concepts. Instead, the film separates any concept of gender politics, and addresses the art of performance, in all of its brilliance and its humanity. Unlike Scott's best known work now, the beauty comes not from subversion, but from the intense focus on dance.

It's a minimal film, and something so minimal will raise some eyebrows when winning such a major award from such a major award ceremony. It isn't as immediate as Norman McLaren's Pas de Deux (which was nominated for an Oscar but lost to "Robert Kennedy Remembered"), nor is it just one part to a larger more complex whole, like a dancing scene in a more varied work. Flamenco at 5:15 is as expected as its title suggests, a half-hour of dancing. The difference between being there and watching this film is the direction of Cynthia Scott, and the work of her crew editing and shooting the film to make it presentable to audiences.

Is there a brilliance in something so minor? Well as we saw in Strangers in Good Company, subtleties and histories can be found in mundane conversations and conversations, evoking something shockingly emotional and powerful. Flamenco at 5:15 is not that sort of effort. No inner nuance can be seen in one thing representing or hinting at another, it exists to show exactly what is seen, and not much more. In that way, Scott shows herself in more of a technical way here, with layers of storytelling coming on the horizon of the following decade.

A depth is seen more in how passionate these people are, and how dedicated they are in their performance. Brief descriptions are had by teachers, in between exhilarating scenes of dance. What these scenes see is the exploration of performative culture, however subtle that may be. It lays its art out so obviously, but just as you would while in the room, something beyond the actions of the movements is felt. How it all intersects, the music, the dancers, the observers, it's not something everyone is interested in, but that may have been Scott's intentions in exploring these classes so straight-forwardly.

In these explorations comes a new charm of the film, that being Scott's direction. She isn't overly complex in what she does here, but every visual moment of the film is perfectly framed, every sound is precise, the camera motions and edits become almost like a dance in itself. Just as this is a celebration of dance, it is a celebration of filmmaking. Flamenco at 5:15 subtly but assuredly runs the two beside each other to a point where they both seem so similar.