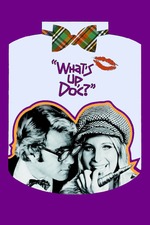 The reigning consensus amongst my friends seems to be that they far prefer WHAT'S UP, DOC? to its original inspiration, BRINGING UP BABY -- something with which I personally disagree. Both films, of course, are brilliant and boast their own individualized set of strengths. I particularly liked how Bogdanovich let his imagination run wild, straying from a "remake" or even "adaptation" by borrowing only the broadest strokes of its predecessor: namely, the defining tropes that characterize the madcap couple and their disparate dynamic.

Though the knack for comedic timing is largely on the mark, the entire project suffers for the few lagging moments where it's entirely absent. Bogdanovich tries to compensate for these longer scenes (the courtroom is a perfect example) by weaponizing chaos, but instead his appeal only further contributes to its annoyance.

Ryan O'Neal, while capable, contributes an overwhelmingly milquetoast performance when sized up against Cary Grant. In spite of the fact that he easily nails the continual confusion and daze surrounding the doctor, his characterization still feels significantly lacking. Streisand, on the other hand, is phenomenal. All of O'Neal's best moments, unsurprisingly, are directly shaped and influenced by the caliber of Streisand's performance. On his own, he's lackluster, yet with Streisand, he scintillates. Madeleine Kahn (in her first feature!) does a good job with the material given, but her potential is scarcely visible thanks to the relative limitations assigned to her role.

What I appreciate the most about this film is that Bogdanovich's eccentricity dominates front and center, making it all the more endearing to watch. His ardor for cinema is palpable in every frame, and the allusions he works in are cute and quirky in a way that's entirely unique to him. The dialogue is witty and self-aware, in my opinion the funniest aspect of all. A real treat to see at the Aero in Santa Monica, complete with a post-screening Q+A with none other than the man himself. A thoroughly entertaining experience throughout.