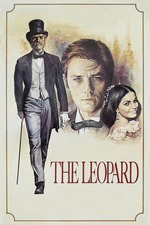 The version of Luchino Visconti's The Leopard now on display may come to be referred to derisively as the "American" or more precisely, "North American" form of the species. It was this striped tabby cat that opened the Fourth Montreal International Film Festival to no great acclaim.

It is necessary to criticize the dubbing into English, if only because Burt Lancaster would probably gain authority and plausibility if his overenunciated Americanese were dubbed into Italian. After all, Fellini did wonders for Anthony Quinn (La Strada) and Broderick Crawford (II Bidone). The advantage of Italian (or Swahili, for that matter) over English—dubbed or otherwise—for most of us North American "art film" addicts consists of our suspending judgment on the reading of lines to concentrate better on the visual component. If more of our snobbishly subtitular critics would stop and look at American films instead of just listening to the familiar noises on the sound track, they might discover a new world of visual glories. Still, snob values being what they are, I think it would have been wiser to open the original Italian-language version of The Leopard in New York for prestige purposes and then circulate the dubbed print in the hinterlands. (If you hear shots in the distance, that is just the hinterlanders retaliating against big-city condescension.)

I think another mistake was the shortening of the film for American consumption. A bad film can never be improved by cutting simply for length, and a good film can only be harmed. Careless scissors only increase tedium, because the meaningful links are severed and the plot dribbles out in all directions.

This is particularly true of Visconti's ambitious and reasonably tasteful treatment of the late Prince Giuseppe di Lampedusa's surprise best seller on the lethargy of the Sicilian nobility during the earth-shaking decades between 1860 and 1910. Lampedusa's novel expresses some of that temporal resonance one finds in Chateaubriand, that sense of history which defines the beginning in terms of the end, birth in terms of death, revolution in terms of restoration. "Nothing could be decently hated/' Lampedusa's prince observes, "except eternity." It is this conception of eternity rather than the slight action of the novel which dictated Visconti's long running time, and even American distributors should think twice before trifling with eternity. The whole theme of The Leopard is, in fact, eternity fashioned after the intransigent Sicilian landscape, climate, and temperament, draining history of its vitality and momentum.

Curiously, Visconti fails to avail himself of some of Lampedusa's most striking symbols, most obviously the leopard on the frayed coat of arms, and the incredibly tenacious dog-being Benedico, the great Dane, who (in the second paragraph of the novel), "grieved at exclusion, came wagging its tail, through the door by which the servants had left." Fifty years and the rest of the book later we come upon the stuffed form of Benedico "flung into a corner of the courtyard visited every day by the dustman. During the flight down from the window his form recomposed itself for an instant; in the air one could have seen dancing a quadruped with long whiskers, and its right foreleg seemed to be raised in imprecation. Then all found peace in a little heap of livid dust." The only comparable image I can recall is Chateaubriand's simultaneous recollection of Marie Antoinette at court and his identification of her skeleton many years later from the smile she had flashed for an ephemeral instant.

Where Visconti poured most of his talent and feeling was into his stunning decors, particularly those embellishing his climactically anticlimactic ballroom sequence, where history executes an ironic quadrille with death, dung, decay, and disgust to the mocking strains of a hitherto undiscovered Verdi waltz. The dream and the specter of Garibaldi have dissolved in the morning mists. Revolution and reform have disintegrated into bourgeois idiocies.

Visconti's conception is impressive even without the breadth of Lampedusa's symbolic tapestry. Visconti, the shrewd Marxist-aristocrat, the exquisite decorator, lacks that final spark of the mystic so necessary to a unified vision of life. On screen The Leopard is an admirable film of parts, fully revealing the virtues and limitations of its director. What for Lampedusa is an expression of vanity of vanities is reduced by Visconti to the more familiar dimensions of a victory of reactionaries.

Not Andrew is using Letterboxd to share film reviews and lists with friends. Join here.