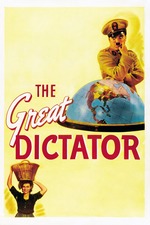 Charlie Chaplin was the king of silent films, the icon of speechless cinema. In a way, his silent films of the 20’s and 30’s are the films that speak the loudest; not only detailing the condition of society at that point in time, but showcasing the vulnerability that comes in “a society that abandons him and treats him like trash”. He put every bit of himself into his signature pantomime comedy, whether exploring greed and self-importance in The Gold Rush or examining eternal bliss and prosperity in The Kid or City Lights. He made sure he eliminated prejudice with his silence, cruelty with his comedy, and ensured everyone who saw him remained seen by others (if that makes sense). Frankly, he (or should I say The Tramp) was the physical embodiment of pure joy and ebullience in a world that seems inclined to destroy your focus off of what really matters. And that’s when The Great Dictator comes in, arguably Chaplin’s most accomplishing movie. It not only reassured Hollywood of his ability to do everything at once, including talkies, but his chance to take leadership during the start of a war everyone in his country simply did not care about.

What makes it a tiny bit funny is that this movie is basically Chaplin’s goal to take back his mustache (among other obvious things). After all, his mustache was never intended to also be a symbol of evil. The Tramp and all his grandiose adventures through the ages were lighthearted, whimsical, and above all else, magical. Completely driven by him and his charisma. And that’s where technicals and sound comes in. With sound, Chaplin was able to communicate his more personal and mature themes through film and the liberties the art form provides. In fact, the only time before The Great Dictator when Chaplin willingly utilized synchronized dialogue was a brief few seconds in Modern Times. But he knew a few seconds of sound would not suffice here. In a story this grand and notable, there would be now substitute for sound. I think the films greatest virtues in regards to using sound is in Hynkel’s numerous speeches. They’re all a satirical version of Hitler’s fast-taking speeches, but what makes it, well, a satire is the fact that Hynkel is literally yelling gibberish. Hitler wasn’t, speaking fluently in German to terrify his enemies and wrongfully inspire his followers. What makes this a parody is that Chaplin is basically saying there is no difference between evoking hatred in helpless followed and pure nonsense gibberish. He tells us that, in the end, what’s the difference between pure evil and pure dimwit? Only sound could have communicated that.

What makes The Great Dictator perhaps the most pivotal and important movie ever made is Chaplin’s ability to peacefully inform America -a virtually unfazed nation at the time of 1940- of the oppression faced by those on the other side of the world. He needed people to realize the horrors being committed by another man. A man who looked exactly like him. At the time, his mustache was the only mustache that looked like that. His signature appearance was unparalleled to anyone else. But that wasn’t the case. But he couldn’t simply show the horrors to people through the screen. He needed to tell them. He needed to leave his usual conformity of silent pictures and let go of his persona as The Tramp. There is no Tramp speaking during the final speech, only Chaplin. The first example of breaking the fourth wall, as Chaplin is trying to communicate the philosophies of democracy, but most importantly, the true meaning of his films. Happiness. Hope. Loyalty. The very idea that we have the collective power to provide help to each other, no matter the cause nor circumstance we may find ourselves in. It only makes it more powerful that a man looking like Hitler, the personification of tyranny, give a speech on self-government and leadership. Hitler was only born a mere four days apart from Chaplin. The man who inspired the most evil and asinine actions in human history was born less than a week after the man who inspired billions of creators and influencers around the globe. While Chaplin was able to flourish peace around the world, Hitler tossed it around his room without care (literally) for the billions he toppled over in the process. His dire need for lust and power rivaled The Tramp’s goal for enlightenment. So, The Great Dictator ends with without a doubt the greatest speech in cinematic antiquity. A humanizing ending, one that made me burst out in cheers. And just like that, Chaplin strikes with the biggest insult anyone ever could have given Hitler; associating happiness with the face of the German chancellor. The world may be in shambles, but never forget that a sliver of hope remains in all of you. Never forget that Chaplin came before Hitler. Maybe you just need to look up.

Ultimately, the greatest accomplishment Chaplin’s highest grossing film has to offer is asking arguably one of the most controversial questions faced by the human race; can a great dictator be a good man?