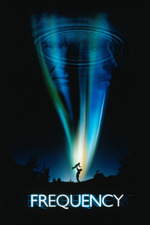 When I was nine, while sick from school, my dad put on this movie. I haven’t really watched it since then, but I’ve always remembered it, at least nostalgically. Nearly two decades later, it’s a really strange experience to witness.

It’s a white dad movie. It’s a father-son movie and a baseball movie with a soft-sci-fi twist. A very sentimental movie about an idealized American life that doesn’t really make sense to me, except mythologically. And yet it was strangely effective for me at times due to the nostalgia. Brought up a lot about my dad and death in the family, and was a rare case of childhood nostalgia for me.

At least, that’s the first hour. The other half is a serial killer movie with a sci-fi twist that is also a white dad movie. Due to some butterfly effect shenanigans, a serial killer who killed three women now killed ten women, including the wife/mother, because the son saved his dad from dying thirty years ago. So now dad and son have to stop a brutal serial killer’s psychosexual reign of terror while 30 years apart. It’s...restrained in how violent it is, but juxtaposed with the incredibly sentimental first half and ending, makes it feel so much more lurid than it really is.

And oddly enough, some of it works in both movies. There’s a sequence where dad and son fuck up trying to stop a woman being killed, and it’s shockingly tense. The serial killer being a cop is a interesting touch that’s surprising given this movie is pretty pro-cop otherwise. The tonal tightrope is decently well-walked given how drastic the difference is. There’s a few scenes in here that work pretty well.

But also it’s ridiculous, the writing is messy as hell, and the son makes some laughably contrived choices that surpass even the usual clownery of a pig. It’s an uneven white dad movie about the eternal love of a father and son and baseball in an idealized America haunted by a serial killer cop sharpened by the butterfly effect.

But it worked for me. Mostly nostalgia, but a few good swings and a little audacity do it good.