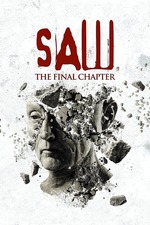 Just finished my journey through the entire Saw franchise and what a trip it has been! The SAW franchise could easily be classified as one of the best horror film franchises out there!

Every film in the franchise offered clever twists and turns! Measured intellect went into the storyline making it deserving of an audience! An iconic villain worthy of the fear, thrills and chills he inspired! Plenty of gore, horror and diabolical contraptions compliments of Jigsaw to put horror lightweights into a catatonic state and horror heavyweights into an orgasmic nirvana!

The Final Chapter tipped the scales in favor of more chills and thrills and less drama and backstory which makes perfect sense if they wanted Jigsaw's grand scheme to end with a bang! And end with a bang it did!