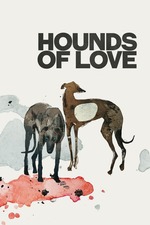 Hounds of Love opened in the U.K. yesterday, just like Wish Upon (which I saw and posted about last night). You might think these two films are so disparate that any comparative reference is absurd and you'd kind of be right and YET! Both are ostensibly horror films, and both are textbook examples of either exactly what I like in horror and exactly what I hate. It's just my opinion, obviously, but if you ever want to know exactly what I think of the genre, these two films and my thoughts on them pretty much sum it up.

What's interesting is that Wish Upon is, of course, critically dismissed because it's a supernatural teen horror film (even tho, as I say, I thought it was really well done) whereas Hounds Of Love has got serious critics jizzing into their notes with praise because tonally it's "serious" and "gritty" and slooow. Never mind that it's a cretinous, juvenile, idiotic trashfire. IT IS SERIOUS. ELEVATED. Let's worship at its altar of dreary cliches.

So it's THAT film again. You know. The one where someone is kidnapped and tortured and tries to escape for the duration of the movie. Of course, when I say "someone" I mean an attractive young girl. Because it's always them. Will she get out? Won't she? To answer that question, at any time, check how far into the film you are. If you're 40 minutes in and she's making a break, odds are it won't happen. If it's near the end, I dunno?! Maybe?!??!

You've seen all of this before (although possibly not in an 80s Perth setting, the film's only vague claim to originality, although even this is soiled by the ostentatious level of attention on coffee jars, beer bottles and Split Enz tickets, just in case you didn't notice the production design yourself). From the first few scenes, every last beat of the story is broadcast so loudly, all that remains is to sit and wait for an excruciating two hours of tedious sadism to pass while it hits them.

Where this could become something interesting is through its characters but they are paper-thin stereotypes. The antagonists are a Psychology 101 depiction of a toxic relationship (I actually thought this was done better in August Underground's Penance!) - there's no depth or surprise to how they behave so they're not interesting or engaging. There's no pathos. There's no moment where you think "maybe I get this, maybe I see inside their head". They're both, in different ways, depicted as pathetic psychotic garbage which is just exhausting after awhile. OBVIOUSLY, the guy is weak outside of his own torture dungeon, picked on by his peers. OBVIOUSLY, she stays with him because she thinks she can't live without him even though she has reservations about the whole raping and torturing schoolgirls thing. Because it's always the same. If you feel clever because you can connect the cycles of abuse here, read a book on it sometime. It'll blow your mind. Although it won't spoonfeed you everything and hold your hand the way this film does.

Likewise, abductee Vicky (even down to her fucking NAME!) is never a real character, her sole trait being that she is a victim. And, boy is she a victim. I have (incredibly) seen reviews that praise this film for its restraint in depicting sexual violence. Really? I mean what are you EXPECTING? Penetration shots? There are close-ups on boxes of dildoes, panties being pulled down, shit running down legs, naked man on top of girl, I mean there isn't a lot of detail spared short of showing actual sexualised nudity and while I'm sure some would argue it's THE IMPLICATION and how very clever this is, I'd venture it doesn't make you any smarter for shooting it this way. It's still in its way a graphic depiction of rape, shot with intention is to harrow. There are also some shots that - while I doubt were intentionally so - come across as outright lecherous and gross (panties hanging from the washing line in slow motion, the lingering opening shots on girls in their gym kit).

Which would be acceptable in some other context perhaps, like if this film had a point. But it doesn't, beyond just a tired depiction of cycles of abuse. If anything, I said in my review of Wish Upon how much I enjoyed that its protagonist was allowed to make bad decisions of her own volition. Here, Vicky isn't even given that opportunity. She is almost on rails as she checks off a list of "don't do that"s from some kind of dated victim blaming public service announcement. Don't be an attractive young girl. Don't dress provocatively. Don't go out late at night. Listen to your mother. Don't talk to strangers. Don't get in their car. Don't go into their house. Don't accept a drink! Otherwise YOU WILL SUFFER. I'm sure this isn't quite the film's intention but there's an implicit and depressing thread running through it that if you are a woman, this shit will probably just happen because y'know, men are pretty terrible and you are basically asking for it by existing.

I only need to read one newspaper to see a variant of this story. I only need to look at the comments section on almost any website to see systematic sexual threat towards women. Every bastard day. It's the status quo and it's fucking horrible but what is this film telling me about it? What is it subverting? How is it transgressive?

Obviously its director is a young white man and it shows. The film, above everything else, is IN LOVE with itself. Big time. There are nods to films like Tyrannosaur or Naked (when it plays closer to Last House On The Left). There are suburban tracking shots straight out of Blue Velvet (which told us 30 years ago that, like, evil lurks behind the picket fence, man) and some slow motion tracking shots straight out of Jonathan Glazer videos. There's also "stylised" use of beloved classic rock tracks like Nights in White Satin or (to my horror) Atmosphere by Joy Divison, in that Tarantino/Rob Zombie/Edgar Wright fanboy kind of way. You can almost imagine Ben Young kissing the screen in his editing suite putting this together but again, what's the point? Do we need this guy to tell us - through artsy photography and seminal rock songs - about the horror of rape? It feels self-aggrandising, crass and utterly inappropriate. Still, give it two years and he'll be helming a Marvel movie, you can bet.

I try not to go off on too many rants like this because I hate pouring more negativity into a world so full of it but Hounds Of Love just ticked every last box about what I despise about the genre. I thought it was sheer idiocy from start to finish. But oh well, they got my £12.50 ticket fee. I think I mostly went to see it because I liked the title and poster art. Poor Kate Bush, having her great album appropriated by this rubbish. One redeeming feature. At least they didn't get to use her music.