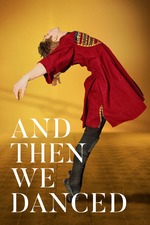 a beautiful film on so many levels, it’s hard to know where to start the review...
on a technical note it was incredibly well done, to the point where the lighting and cinematography work genuinely made me tear up :,)

the performances were all outstanding, but levan gelbakhiani’s portrayal of merab was particularly nuanced.i’m stunned that this is his first film given the intense range and delicacy that was able to translate through the screen. he reminds me of timmy chalet a bit by appearance, but honestly i much prefer the honesty of levan’s acting.

the script was very well paced, slowly immersing us in merab’s life until the appearance of irakli suddenly throws a wrench into his otherwise monotonous life. the scene with merab and his brother at the very end really highlights the elegance of the scripts ability to capture small intimate moments.
in terms of the queer element of the film, i do appreciate that while it does play a central role within the story, it weaves itself in naturally.
this could have easily turned into a “dude from a conservative country struggles with his queerness and is mercilessly punished for it.”
there was an element of this in the script, but it was managed in a much more intricate way, weaving in issues of artistic identity, belonging, self defiance, and loneliness through out.

i don’t usually write long reviews like this but it’s been a while since i’ve seen something this inspiring. fab film :))