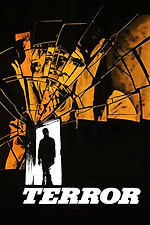 I've noticed that others tend to highlight the more absurd sequences here, such as the one in which a man is attacked by a whole bunch of film stock - and that's a pretty great bit - but I personally thought the opening 25 minutes or so were pretty perfect (and kind of wish the rest of the film had properly followed up on them).

With that said, you can only go so wrong when you're attempting to remake Suspiria, which is basically what Norman J. Warren is aiming for here (I think he's even admitted to as much). It's a mixed bag, and there are some super bizarre sequences that don't feel like they make any sense, but it's a pretty sturdy time-killer for a rainy day afternoon (which is all I was hoping for, to be honest).