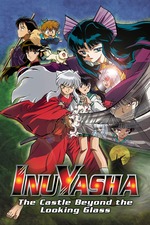 Now THAT is more like it. The crew got the direction right this time, dodging the uneven flashiness of the previous installment by embracing something more slow and existential in the midst of a presumed end to the series’ main threat. Our protagonists, coping with this sudden outcome, break off, giving the audience a personal glimpse of their paths in the aftermath; many episodes of Inuyasha don’t feel as open and vast as this film presents itself, with the looming melancholy overcome by a connected disturbance in the form of the main antagonist, Kaguya. Yes, her personality and arc is no less duller than the most expendable of the series’ villains, but that’s less of a problem in this case, for the story prompts a bigger picture in its rock-solid center. What remains in The Castle Beyond the Looking Glass is a polished, grand, and much more cinematic Inuyasha film that is impressive to watch even despite its predictability.

The opening scene alone blew me away - it moves so swiftly and urgently yet so patiently. This opening fight sequence features no music during its first half, reminding the series’ viewers of the situation and threat our protagonists have been dealing with. The riveting buildup to Inuyasha’s transforming back to his half-demon form might be my favorite sequence in the film for its direction alone. Adding to the lack of action that follows this introduction are character moments that benefit the string of events set in place for the remainder of the plot while still benefiting their personal journeys, even establishing something refreshing stylistically with a more angled and manga-faithful art style as a plus. The technical quality, even if not amazing compared to other anime films, mixed with the personal character growth and inner feelings of confusion and eventual danger from our protagonists make for an entertaining-yet-flawed sophomore film that is not only watchable, colorful, and balanced in terms of its action and comedy, but also a knockout for a mere franchise product.