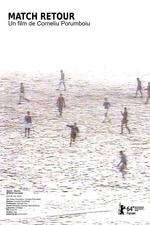 Is my philistinism showing through?

Porumboiu's experimental feature is a tough one to evaluate. I greatly admire it as a conceptual work. Its rigor is undeniable, as is its raison d'être. The director's father Adrien, who was a prominent football referee during the Communist period, is watching and commenting on a taped match, in its entirety, along with Corneliu. It's a match Porumboiu Sr. officiated, between two Romanian teams (Dinamo and Steaua) who were semi-directly affiliated with opposing political camps (the Secret Police and the Army, respectively). So although Porumboiu was highly respected as a fair and impartial referee, he understood that he was walking a thin line as far as Ceausescu-era politics was concerned.

The Porumboius provide the equivalent of a director's commentary track on this grainy tape, which the older man acknowledges looks like an artifact "from the Stone Age." Adding a layer of frustration to both the original match and our revisiting of it, the game is being played in a near-blizzard, so the team jerseys, much less the ball, are visually illegible most of the time, subsumed by the combination of actual and TV-analog snow.

The Second Game is an undoubtedly intelligent combination of structural aesthetics and media archeology. Porumboiu Sr. remarks that sports are meant to be "consumable," not lasting like a film or a work of art, but his son's exercise in historical excavation belies this pronouncement. Despite the nobility of this effort, I confess that The Second Game was an absolute slog to actually watch. Were it not for my interest in Porumboiu's work, I probably wouldn't have lasted 15 minutes. Great idea, diminishing rewards.