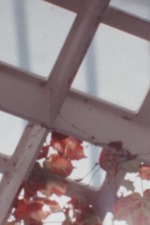 This film is insane.

Mostly it appears to focus on texture, almost to the point of obsession. It begins with various hands in close-up knocking on hard plastics -- TV backs, exercise equipment (I think), the fender of a motorcycle (I think), until it smooths us out over a pleather chairback. Then, with eerie precision, the camera scales a nondescript building, from the ivy on the ground to the upper floors, and back down.

Soon after, an interlude of water falling -- first filling a tub, then a torrent from a waterfall -- is accompanied by "You've Come Back" by Leslie Gore. (This is the second film in the Crossroads festival build around a Gore song, incidentally.) Graphic semi-matches of cascading liquid presage a return to the building, this time scanned with a left to right tilt-pan.

There's a fixation on a very plush white rug. We see it twice, once with bare feet sinking into it, and a second time as a runner puts his shoes on with the squishy rug beneath him. After going for a run, creating various scenic blurs, Forms begins reprising other visual motifs -- the building, the foliage, (another) plush white rug, while also traversing a sterile domestic interior. These shots are clipped and rhythmic, not unlike the snare-drum edits in the second part of Michael Snow's Presents.

But then we end things in a kind of warped version of a shopping channel. Again, we are asked to luxuriate in manufactured surfaces, only this time the pleasures they offer are not purely formal or aesthetic. They are explicitly bound to capital. Like, here's a lovely iPhone. It shines. Buy it.

But Epcar ends things with an iPad punctured through the middle, a plant sticking out of it. Maybe there's hope? It's as if nature is reclaiming the earth, like a pavement split by an oak tree, in miniature.

I don't understand this at all, but I really, really dig it. All hail Zachary Epcar.