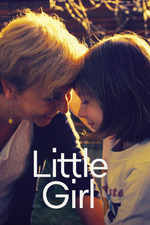 Little Girl is a documentary about an eight-year-old trans girl struggling with bigotry and ignorance while growing up in a suburb of Reims, and in many ways it's a difficult film to evaluate. It's very much structured like a particularly sensitive TV-news profile, and in that respect it somewhat betrays some of its ostensible ideals. As we watch little Sasha speaking with a gender health psychologist, her mother sitting beside her, any attentive viewer will wonder to what extent having a film crew staring at her is making it that much harder for her to articulate her experience. One extended sequence in a ballet class, where Sasha is silently but aggressively misgendered, is painful to watch.

But the nature of Little Girl is firmly liberal, and this means it is assuming a viewer who requires some basic coaching when it comes to empathy with trans people. Lifshitz directs much of his focus toward Sasha's loving mother, who is shown moving through a series of completely understandable parental anxieties. She starts out irrationally worrying that her secret wish during pregnancy that Sasha would be a girl somehow "did this" to him. Later, we see her fighting on Sasha's behalf, while privately expressing her fears that Sasha will be bullied and possibly killed. "I feel the way the parent of a disabled child must feel," she says, "sad that her life will be harder than everyone else's."

Even as I express these misgivings about Little Girl, I feel somewhat guilty, as if I am holding the film to an unfair standard. In an ideal world, there would be a plethora of films about various facets of the transgender experience, with different foci, all capable of informing and critiquing each other. That not being the case, a great deal of pressure is placed on any given representation of trans lives. Every film is open to criticism, but in subjects of sociopolitical import on under-represented communities, it can seem disingenuous to find fault, as if one is nitpicking for insufficient political correctness.

I think it's important that we look at Little Girl for what it is, instead of conjecturing who its audience might be. But every documentary is a work of rhetoric and argumentation, and part of that structure has to do with the presumed audience and how the "best," most effective argument can be made for those particular people, at a particular historical moment. Throughout Little Girl, Sasha's family explains her situation very simply: "she is a girl, but she was born in the wrong body." This may well capture Sasha's experience, but if we mistake that for the experience of every trans person, or more importantly, assert that this and only this represents a "true," valid trans experience, then we are being reductive at best, exclusionary at worst.

To be clear, if we look at Little Girl's basic claims from the point of view of political efficacy, they do make sense. Just as the basic establishment of gay and lesbian rights demanded a kind of gender-theory orthodoxy -- that homosexuality is an innate trait, and not a choice -- the wrong-body assertion is most likely to convince transphobes that kids like Sasha should be helped and supported. This is not just politically useful, but in some cases legally necessary. (Here in Texas, if we did not have the support of my parents for my son's transitioning, they could hypothetically have gone to court, accusing my wife and me of "child abuse." This happens all the time here.) So it becomes necessary to define and delimit trans experience, in order to establish a foothold in a legal battle that trans people did not choose, the terms of which they did not set.

But this is the crux of the matter. Why are some people's lives turned into political "problems" in the first place? By sheer chance, I went to get the mail midway through watching Little Girl, and I received a "legislative update" (read: propaganda with franking privileges) from my repugnant Texas State Representative, Valoree Swanson. A woman as dumb as the spelling of her first name would suggest, she actually lives just a few blocks away from me. And aside from her other proposed bills, such as "banning abortion after a heartbeat is detected," and "designating gun stores as essential businesses to prevent closure orders," she is sponsoring something called the "Fair Play in Women's Sports Act," which aims to exclude "biological males" from competing in women's athletics.

When monsters like Swanson are targeting my child, partly out of Christian bigotry but mostly as a way to weaponize the bigotry of her base, and fill her political war chest, I understand that it is absolutely necessary to fight them with the scientific, psychological, and moral claims most likely to sway the sympathy of those who have never even met a trans person but hold part of trans folks' destinies in their hands when they vote. I get it. But if there is one thing that legal definitions always do, it is to exclude, set parameters, confine human experience to a one-size-fits-all generalization. And I am sick and tired of seeing the lives of my friends and loved ones, my family, subject to the brutal, imprecise cudgel of legal definition. Why can't they just leave us the fuck alone?