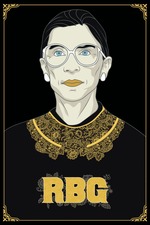 So I’ve been familiar with this documentary probably since it got released and it did all its turn through the Award season and media through parodies and what not. For some reason this has been buried on my queue since, and so I thought with Women’s Day being today I thought “why not finally jump in and give this a watch?”.

And let’s just say I get why Ruth gets so much appraisal and is placed in such a high pedestal. Her work is just inspirational and in many ways she help set the bar and opened so many doors that were (and in some ways, still) are closed to women and minorities for some of the most absurd reasons. I guess it also helped I could sympathize with her because I could draw a few connections between her and my own mother, especially when it comes to the personality haha.

In terms of the documentary itself, it was again pretty enjoyable and informative. From a technical standpoint, there’s really not much groundbreaking work, its pretty traditional footage and talking heads, playing more like a character study than anything else.

All in all, a really good documentary about a great individual. Its definitely one I would recommend if you haven’t given it a watch.