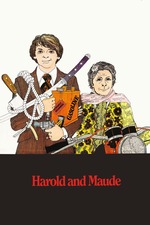 I get why this film resonates so much with a specific demographic of nostalgic old hippies, and aging baby-boomers who feel creatively stifled by their careers, but its central message of tuning in, turning on, and dropping out was a tad outdated even when it was originally released, and it certainly hasn't aged like a fine wine since.

But what really chaps my ass are the 1-dimensional strawmen authority figures that director Hal Ashby sets up as Harold's obstacles on his road to being free to be free, or becoming me, or becoming you, or whatever the hell Cat Stevens was twee-ly singing about all those years before he converted to Islam and ironically started calling for the death of certain people who didn't want to become him. The semi-crazed military uncle, the snobby, rich, indifferent mother, the hapless computer dates, the ineffectual policeman...Ashby treats them all with the same smug air of dismissiveness as he presents the elfin tree-hugging anarchist, Maude, as the template of humanity that all of us must aspire to. Sure, she's charming and fun, but clearly nutty as squirrel poop, not to mention an absolute menace on the highways.

The only real 3-dimensional being here is Harold, and Bud Cort does a fine job of making us sympathetic to his search for love and a sense of self, but here again Ashby loses me. Harold is clearly extremely creative, intelligent, and talented, you can see it in his suicidal vignettes, dark humor, and especially, in his talent for pimping old hearses and Jaguars into bitchin' Kustom Kars. He doesn't *need* to become anyone else, the only thing he lacks is someone to share his love of these odd pursuits and adore him for being the utterly unique individual that he already is. So what does Maude do? She convinces him to throw all of that proto-Goth goodness away and go organic, get high, get laid, run around saving trees, and play the banjo (badly). Way to go, Maude, you really saved him, but from what?

Real life finally intrudes when Maude decides to snuff it for no reason other than having just turned 80, leaving Harold utterly bereft. Again, way to go, Maude. Just kick the poor kid in the nuts after leading him on and making him fall hard for you. In the real world, this would provide Harold with an excellent object lesson in why you should avoid getting into relationships with batshit insane manic pixie dream-grannies like the plague, but no, he embraces her selfishly kooky worldview wholeheartedly, and decides to ditch everything that makes him special, and join the army of society's drop-outs. Huzzah.

As Harold skips and plucks his way over the hills at the end of the film, after having destroyed the beautiful JagHearse (sob!), all I can think of is him in 5 years, strung out on heroin, busking in Haight-Ashbury for a fix, while attempting to play "Foggy Mountain Breakdown"...still badly.