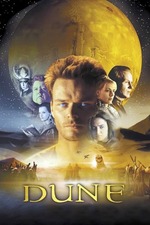 Like millions of others, I was greatly disappointed when the release of Denis Villenueve's Dune remake got pushed back to October of 2021, so I attempted to salve the butthurt with a rewatch of this artifact from an ancient age before the Sci Fi Channel lost all credibility and actually produced a handful of shows that didn't jump the Sharknado.

After the Lynch film made "Dune" something of a cult laughingstock among the book's fans, this was a welcome attempt to refocus on the actual story and serious philosophical ideas in Herbert's classic novel, and in some ways it succeeds admirably, but sadly, it's let down greatly by some inexplicable casting choices, Playstation-quality CGI, and sets that in some cases are very clearly painted backdrops. As a matter of fact, in many respects, the entire production resembles a stage play.

The biggest misstep in my opinion was the casting of William Hurt as Duke Leto, as his somnolent delivery seems highly inappropriate for the material. The next mistake was casting Alex Newman and Matt Keeslar as Paul Atreides and Feyd. They're just pretty-boy nothingburgers who can't act their way out of a paper bag. Okay, that was unfair. They *can* act their way out of a paper bag...a wet one anyway.

Ian McNeice's portrayal of Baron Harkonnen is more successful, especially compared with Kenneth McMillan's cartoonishly slobbering, pustulent, and heart-plug rapey depiction from the Lynch version. McNeice plays the Baron as the evil strategic genius he is in the book, minus the homophobic undertones that Herbert gave the character. Saskia Reeves also makes for a much more believable Lady Jessica.

Stripped of all of Lynch's kinks, this plays out as simple space-opera, which is fine if all you're looking for is a straightforward retelling of the book with low-fi SFX, but it lacks that specifically Lynchian goofiness and keen sense of a decaying empire that made the earlier version a cult classic. Also, how can you ever hope to top a sweaty Sting emerging from a steambath in winged underwear?

The Sharks must not flow...