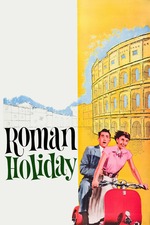 Princess Ann: "I've never been alone with a man before, even with my dress on. With my dress off, it's MOST unusual."

SYNOPSIS: A bored and sheltered princess escapes her guardians and falls in love with an American newsman in Rome.
- Source: IMDB

TRIVIA: Paramount originally wanted to shoot this movie in Hollywood. William Wyler refused, insisting it must be shot on location. They finally agreed, but with a much lower budget. This meant the movie would be in black and white, not the expected Technicolor, and he would need to cast an unknown actress as the Princess, Audrey Hepburn.

Constantly advised, overprotected, and bored with her royal duties, Princess Anne, on holiday in Rome, evades her protectors and sneaks out at night to discover how the ordinary Italians live.

TRIVIA: The first American film to be made in its entirety in Italy.

While traversing the streets of Rome, she collapses due to immense exhaustion. Joe Bradley (Gregory Peck), a newspaper reporter who was planning to interview the Princess the following day passes by and notices our forlorn princess passed out on a bench. Not realizing who she is, he eventually takes her to his apartment where she spends the night on his couch.

TRIVIA: Audrey Hepburn won the 1953 Best Actress Academy Award for Roman Holiday. On March 25th, 1954, she accepted the award from the much revered Academy president Jean Hersholt. After accepting the award, Audrey kissed him smack on the mouth, instead of the cheek, in her excitement. Minutes after accepting her 1953 Oscar, Audrey realized that she'd misplaced it. Turning quickly on the steps of the Center Theater in New York, she raced back to the ladies' room, retrieved the award, and was ready to pose for photographs.

After discovering her identity, Bradley charms the runaway princess for the exclusive story he visualizes writing. He calls his carefree photographer friend Eddie Albert and proposes to spend the day with her and experience everything she has always desired to.

TRIVIA: In this movie, Audrey Hepburn and Gregory Peck both met their respective spouses while on set.

Audrey Hepburn, the exquisite incognito princess who finds romance in one of the world's most renowned cultural centers not only lets down her long tresses but also gets a more fashionable cut, as she blossoms to embrace a life she knows she cannot keep.

TRIVIA: The story was originally optioned by Frank Capra in 1949, who had hoped to cast Cary Grant and Elizabeth Taylor in what would essentially amount to being a variation on his Oscar-winning classic, It Happened One Night (1934). However, Capra's Liberty Films production company was beset with financial problems and he was forced to sell the property to Paramount, where a combination of political timidity (Capra discovered the involvement of blacklisted writer Dalton Trumbo) and a tight budget prompted him to withdraw from the project. William Wyler, however, had no compunctions whatsoever about working with Trumbo.

Hepburn and Peck are such an attractive couple that oozes great chemistry. Director William Wyler also gets many wonderous shots of Rome while on location to include the Spanish Steps, Trevi Fountain, Castel Sant'Angelo, The Coliseum, later ending it with a classic scene at the Bocca Della Verità. It all makes for a very exceptional, albeit romantic classic. Eddie Albert also plays a fantastic third wheel and like Hepburn, also received an Oscar nomination for his role which he would lose to Frank Sinatra in the Best Supporting Actor category.

TRIVIA: Audrey Hepburn was performing on Broadway in "Ondine" with her future husband Mel Ferrer when she won best actress for "Roman Holiday." Later that year, she won the Tony for her performance in "Ondine," making her one of only two actresses to win the Oscar and the Tony in the same year. Ellen Burstyn is the other, winning the Oscar for Alice Doesn't Live Here Anymore (1974) and the Tony for "Same Time, Next Year."

Someone once said that Audrey Hepburn was the beauty of possibility and transformation, and this film is a perfect example of that. While the film starts out about a princess dressing and being portrayed as an ordinary citizen on the surface, in truth she's actually pretending to be a princess. She finally becomes authentic and is subsequently transformed and prepared to deal with her destiny only through the true power of love and sacrifice. That's in and of itself is a beautiful subtext that does much to explain the films enduring and long-lasting charm.

If you want to remember Princess Anne smoking her "very first" cigarette, dancing on a boat on the Tiber River, ordering champagne for lunch and hitting her own royal agent with beer bottles, and testing the legend of 'The Mouth of Truth;' don't miss this delightful movie with three legendary stars.

For those who have read this far...

Where do you rank this among Audrey Hepburn's roles?

What was your favorite / least favorite aspect of it?

What was your favorite scene?