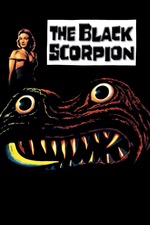 Remember the excitement when you saw the poster for Tarantula, the disappointment when said tarantula not only didn’t rampage through town with victims in its jaws but didn’t even make it to town? Well, The Black Scorpion is here to fulfill that promise and then some (while providing more proof that the stop-motion makes the best monsters).

Edward Ludwig directs a perfunctory ‘50s creature feature that’s a little Them! and a little Tarantula. (Annoying kid included!) The Mexican setting and a volcanic awakening, as opposed to atomic consequences, do offer some interesting twists to what is otherwise boilerplate formula.

King Kong FX maestro Willis O'Brien delivers a sizable amount of giant scorpion rampages. This has a decent build-up to the monster action too, and escalates much faster than I expected. As with the ants in Them, the drooling head close-ups are halfway between abnormally grotesque and not-even-a-second-of-research goofy. But from a distance, the monstrous arachnids are quite horrifying. O’Brien animates them with skittering speed and animalistic savagery; a climactic train attack is still shockingly nasty, as tiny humans scream in agony while being ripped apart by pincers and stingers. A subterranean descent provide a taste of what King Kong’s lost insect pit might’ve looked like: giant spiders, centipedes, and bug brawls, oh my. By the finale, we’re witnessing a giant scorpion taking down helicopters and tanks. The giant creature spectacle was satisfying compensation for the lackluster storytelling.