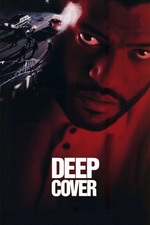 An awfully unsubtle and artless film that's also incredibly miscast in almost every role except the lead one. Jeff Goldblum is stranded here in the noxiously irritating "loose canon" role, not unlike Sean Penn's geek-gangster in Carlito's Way except with zero of the believability or acting chops. The film's dialogue is trying to be quotable, but instead it's flat and embarrassing. It's the kind of movie where someone threatens, "I'd be all over you like stink on doo-doo!" and nobody bats an eye. It's also the kind of movie where every drug-lord and gangster seems culled from other gangster films, not real life; little, if anything, rings true or authentic about the underworld depicted here and its assorted cartoonish characters. The brilliant DP Bojan Bazelli seems to have been highly sought-after, especially for crime films, following 1990's visually striking and seductive King of New York; here, he just is called on to arbitrarily juice up the color-scheme, making every other scene look like it was lit with a thousand red LEDs. Fishburne's calm and collected performance is the only real highlight of this pretentious nonsense, whose widespread canonization as some cult classic is highly absurd.