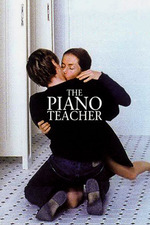 I hope that, with time, the tenderness in Haneke’s work will become more apparent to his viewers. Tenderness, not sentimentality—his films are nothing less than brutally frank in their view of their characters, or for that matter of their audience—but it’s my firm belief that there’s a real humanism, or at least some sort of deep and abiding care for human beings, at the root of all the cold formalism and cinematic sadism on display in his films. La Pianiste is, after all, fundamentally a melodrama; just because it’s been beat-for-beat parodied and distanced by Haneke’s ever-wary eye (in the same way Funny Games does for the horror movie) doesn’t mean it’s any less moving or emotional. On the contrary, the lack of exploitation, the honesty, the sober staging of this bleak tale without recourse to any of the traditional filmic strategies to tug on the heartstrings only makes it more overwhelming and tragic; it’s one of the most beautiful and indeed poignant films I’ve ever seen, though it’s also an ugly and filthy and often cruel one. Every viewing (this is my third) brings it closer to my heart. Maybe one day I will be able to better articulate the reasons why.