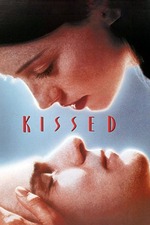 between this n Nekromantik 2, ig necrophilia is just rly untapped in Metaphoric potential?

less adventurous then that film in someways, but in others its no less Dense. if the antagonistic force in nekromantik 2 is oppressive normalcy, with the hidden parts of yourself being a reliable refuge from the world, this film is concerned with that safe space being violated. every scene with sandra's bf is loaded, fascinating, and often hits too close for me: the feeling of being "studied" and oogled for something u have no real control over, the difficulty of explaining it even to someone who is willing to listen, and the feeling of violation when someone sees something as perverse that you see as beautiful, especially when that perversion is a source of fixation for them.

these feelings can be weaponized in bad ways, ways that create exclusionary insider mentalities that ward off the sincere just as much as genuine exploiters. but then again this is a movie about goddamn necrophilia anyway so like...moralizing seems a bit weird lmao