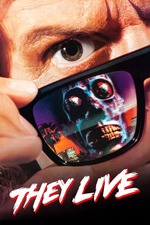 Ah 80s movies we meet again... No I joke, this is an entertaining movie, but why does so much stuff made in this decade feel like it was written by a 10 year old?

Obviously ‘They Live’ isn’t a movie calling out for too much pretentious analysis, and it is fun, but still, I’m pretentious so here we go.

So much of this movie is so unbelievably dumb and obvious thematically. Police bad? Consumerism bad? Elites bad? Awesome... It really holds your hand through the main themes of the film.

A lot of very 80s trash acting in this as well. There was no need for some of the dialogue in this to be as corny as it was... no need at all. Some of the lines in this... STINKY.

Side point but- How did John Carpenter go from the amazing visual effects (and overall nuance and tension) of ‘The Thing’ to this? The bodysnatcher prosthetic effects were rubbish. You can see from the admittedly very strong look of this film that it had a good director at its helm, but I still can’t see how Carpenter went from one of the finest horror films of all time to this. Shame.

This also features one of the dumbest fight scenes ever committed to the screen. That shit was straight comedy.

To say that the ending of this film was rushed would be an understatement. Although I’d stopped caring long before then.

Having said that- I probably would watch this movie again- because it’s fun in an extremely juvenile way, and the buddy avengers vibe that develops midway through is enjoyable. Although next time I feel like I would watch it in more of a ‘get drunk on a Halloween one time and watch a film I know is trash with some mates’ type way.

Meshes of the Afternoon