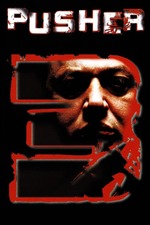 I feel Pusher III holds a very interesting place in Winding Refn’s trilogy. Thankfully it managed to maintain a similar high quality to its two previous instalments while also very much having its own identity and in many ways standing apart from I and II in quite significant ways.

Whereas I and II were extremely raw in their speed and tension, III is much more of a slow burner. While this was slightly discordant with the feel of the rest of the trilogy, it still worked very well in its own right with this story. If there’s one thing that Winding Refn has made clear by now, it’s that he felt no need to burden himself by pedantically sticking to the same themes, styles and storylines consistently through all three films. Additionally, this slower approach meant that when action did come to the fore, it was extremely explosive and hard hitting. Without giving too much away, I found a few moments in this film to be unbelievably shocking and effective, and I think that’s mainly because of how sedate other parts of this film are by comparison.

I loved Milo’s downfall story in this, and thought that Zlatko Buric did an excellent job of maintaining the threat he had embodied in the previous instalments whilst also showing a real melancholic and tormented side as well. The scene depicting his relapse was very powerful, both in terms of his performance and Winding Refn’s direction.

I know by now that the real underlying theme of the Pusher series is leaving the stories deliberately ambiguous and unfinished, but nonetheless I couldn’t help but feel that, even in comparison to the previous two, this seemed to leave a lot unanswered. Whereas the other films had ended with me intrigued and wanting to know more, this did just feel a bit anticlimactic.

Although of course it goes without saying, these are still three extremely good films, and III managed to live up to the quality of the previous two, albeit stylistically and narratively in a rather different guise.

I do feel like the original in this trilogy will always be unbeaten for me, but hey that’s the problem with first loves.

Pusher II: With Blood on My Hands