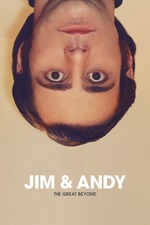 Jim & Andy: The Great Beyond

A fascinating behind the scenes view of filmmaking and the psychology of method acting. I think it's a very worthwhile companion piece to the film.

I did find myself wondering at times how necessary these kind of method antics are to make a good film, but it's nonetheless entertaining and touching in parts.

Parts of it are massively conceited and over the top, but if something has Jim Carrey in it you should just prepare for that as standard. I did think he milked it a bit in the interview sections with his messiah complex, but still, seeing the previously unseen footage as well as the rest of the cast and crew's reactions is a pretty funny watch. There's a couple of really good stray lines that Danny Devito drops in at times when the craziest bullshit is happening right in front of him that show why he's still the king of sarcastic understatement. What a guy.

Man on the Moon