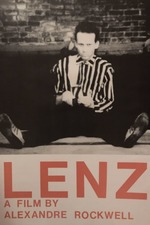 This guy has got to be the worst dinner party guest ever.

What the fuck was that? Who on earth was this film aimed at? Why was that one bit so fucking scary halfway through? This was one long fever dream; and not an interesting one either.

Some parts of this just felt like pure Monty Python. This took itself way too seriously.

I suppose it was interesting at least because it proves that even really good directors like Rockwell need time to develop and improve their craft. I can't believe this is the same guy that made 'In the Soup'. This was really punishing to get all the way through.

That being said, you can tell there is a good director in the making here. A number of scenes were actually very visually striking but WHAT DID THEY MEAN THOUGH?

A lot of this film was very sedentary as well. When stuff was happening, it could be quite amusing/interesting, but what was driving this film forward? When the film decided to linger on certain points I found myself quickly becoming very bored and disinterested because it didn't mean anything to the story.

Also, I don't think this is necessarily the fault of the filmmaker, but the audio quality of this is offensively bad. I had to watch this on half volume just to stop myself getting a headache. However thats more likely due to poor preservation of the film though as opposed to a deliberate decision, so I'll let it slide.

That bit about Egypt was really freaky though, I will say that. Very unsettling. Good job I suppose.

Realistically, the real question this film left me asking was: Why can't life be like farting...?