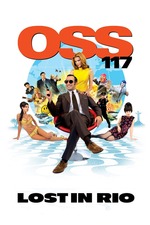 Made three years after OSS 117: Cairo, Nest of Spies, Michel Hazanavicius’s sequel set in Brazil is more stylish but less funny, although maybe watching the two films a couple of days apart did not do them any favours.  Set in 1967, the film can go full tilt at the ‘60s styling that was an anachronism in the few spots of it in the earlier film, ostensibly set in the ‘50s.

I had to struggle this morning to recall the plot, which Hazanavicius co-wrote again with Jean-François Halin based on the OSS 117 character in the dozens of spy novels by Jean Bruce. I suppose that that is a good sign that these films are more about style than substance, which does not stop them from being great fun.

This time around Hubert Bonisseur de La Bath/OSS 117 (Jean Dujardin) is sent to Brazil but only after a cockup at a party he is hosting for a Chinese countess ends up with all the guests but him and the countess dead after a gunfight with Communist Chinese gunmen who will pop up several times throughout the film to try to complete their task.

His mission in Rio is to deliver a blackmail payment from the French government to Professor Von Zimmel (Wim Wenders regular, Rüdiger Vogler) who escaped to Brazil after the war and has a microfilm containing the names of French Nazi supporters and collaborators.  Hubert’s two romantic interests this time (he needs two to outdo the “Bond girl”) are femme fatale Carlotta (Reem Kherici) and Israeli Army Colonel Dolorès Koulechov (Louise Monot).  Dolorès proposes that she and Hubert work with Mossad so that he gets the microfilm without having to part with the government’s cash, and Mossad gets to extract Von Zimmel for an Eichmann-style trial.

If Cairo was a platform for Hazanavicius’s screenplay to trot out racist jokes about Egypt and Arabs, this film turns its sights on Israel and the Jews.  In one of the DVD extras, Hazanavicius discusses walking a fine line between sending up his character’s racism, sexism and homophobia and making a racist, sexist and homophobic film.  I remain unconvinced that he did not cross that line in several places.  While I got a chuckle out of a first-time stoned Hubert getting fucked by a hippy in a puppy pile on a Rio beach then running into him later on the street, some of the Jewish stereotypes and anti-Semitic jokes are harder to justify.

As with the earlier film, Mamar Ech-Cheikh’s production design, Charlotte David’s costumes and Jimena Esteve’s set designs both play up the ‘60s element of the story and enable Hazanavicius to parody films like Vertigo (1958), North By Northwest (1959) and the four Matt Helm films starring Dean Martin (1966 to 1969).  The film opens and closes with Dean Martin songs, “Everybody Loves Somebody” and “Gentle on my Mind”.  David also says in one of the DVD extras that the inspiration for Hubert’s clothes came from Paul Newman’s wardrobe in Harper (1956).

Cinematographer Guillaume Schiffman captures several Rio landmarks, although the showdown between Hubert and Von Zimmel clearly was not shot on the arm of the Cristo Redentor statue that dominates Rio’s skyline.  I was interested that the studio set for this sequence was done to look realistic, while other sequences like the plane crash and all the vehicle scenes were done with deliberately bad rear projection and the alligator that Hubert kills to save Von Zimmel’s son was straight from the props storeroom and had seen better days.  It looks like the sequence at the Iguaçu Falls was shot on location.

The extras on the Madman DVD are a long ‘Making of ‘ documentary, deleted scenes, outtakes (most of which seem to involve Dujardin struggling through fits of laughter to get his lines down), the original French trailer, and a series of short teasers made for French television.

A third film in the series, OSS 117: From Africa With Love, still starring Dujardin but directed this time by Nicolas Bedos, was the closing night film this year at Cannes so we can expect to see it as a headline film in the 2022 French Film Festival in Australia unless a distributor snaps it up first.