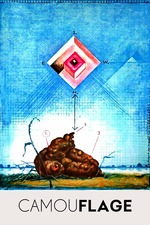 CAMOUFLAGE is a 1976 Polish film from writer/director Krzystof Zanussi—who is still working—and was made during the height of the Communist Oppression. CAMOUFLAGE is a subversive thinking-man’s comedy about a group of intellectual linguists attending a summer camp for doctoral students. The PHD candidates are there to have their thesis compete against one another, and they are to be judged by a panel of professors, with the University Provost scheduled to appear for the handing out of prizes.

Jaroslaw Kruszynski (Piotr Garlicki) is the young up and coming linguist who is given a favorable seat on the judging committee. He is full of ethics, morals and ambition that he seems ready-made for destruction. It may come at the hand of Nelly (Christine Paul), a young student from England, or it may come at the hand of associate professor, Jakub (Zbigniew Zapasiewicz—a Polish cross between Robert De Niro and Jerry Lewis). Even though Jaroslaw looks up to Jakub and cherishes his approval, Jakub is the least ethical man in a house full of snakes. Jakub plays the part of the trickster so well, the Norse God Loki would be jealous.

Zanussi, a director previously unknown to me, is a master. His style is unobtrusive and always with the correct number of actors in a frame as needed. Sometimes the more the merrier; in others, one is more than enough. CAMOUFLAGE is a movie that is set in a very specific time period with a very specific message that speaks to that particular time and place. That somehow makes it all the more timeless. The first 30 minutes of CAMOUFLAGE might be confusing to a modern audience, but the underlying symbolism is so utterly timeless, once it takes over, thoughts of Communism and oppression are the furthest thing from the mind. What matters is what is being presented, and what is presented is just as powerful in 2014 as it was in 1976. Mark Twain said it best (if he did say it), “History may not repeat itself, but it does rhyme.”