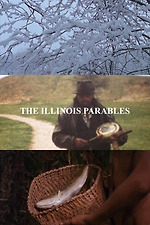 Deborah Stratman's amazing film is neither pure documentary nor experimental film but rather one that combines both modes in order to investigate, in 11 precise chapters, the secret history of the state of Illinois. Origin myths abound: Much of the focus is on the fascinating but too-little-known histories of minority groups that were either forced into exile (e.g., the Cherokee Nation, the Mormons) or that dissolved due to in-fighting (the Icarians) as the territory was still "constructing itself" during the 19th century. Plus, lots of landscape shots, letters from Alexis de Tocqueville and Ralph Waldo Emerson, the assassination of Black Panther Party chairman Fred Hampton, the story of the first nuclear reactor in the Midwest, and a delightful disaster montage. The last of these sequences shows off Stratman's masterful sound design as archival aerial footage of the state is accompanied by a cacophonous soundtrack in which a gospel song, an Emergency Broadcast warning and audio interviews with Tornado Eyewitnesses are all woven into a dense mix. One of the most Illinois-centric films ever made.

Let the Sunshine In