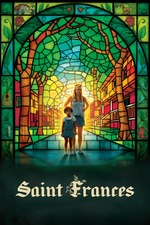 SAINT FRANCES centers on Bridget (Kelly O’Sullivan, who also wrote, in a remarkably naturalistic and winning performance), a 34-year-old Chicago woman with no “fancy job” (she’s a server), no boyfriend and no real direction in life. After she gets a job as a nanny for the film’s title character, the 6-year-old daughter of an interracial lesbian couple in a North Shore suburb, Bridget also unexpectedly finds herself pregnant in the wake of a one-night stand. This basic premise might feel reminiscent of other recent American indies, but the narrative takes an unexpected turn - and continually moves in gratifyingly unanticipated directions as it flips expectations about gender roles, includes some surprisingly edgy humor, and focuses primarily on the relationship between Bridget and Frances (instead of Bridget and any of her potential suitors). In the process, SAINT FRANCES ends up feeling less like other movies and more like a messy slice of real life. To give away more of the plot would be a crime, but the conclusion is admirable for the way that it goes against the grain of how much a protagonist’s external circumstances are supposed to change over the course of a film. The changes that Bridget does experience are ultimately more of the interior—and more profound—variety.