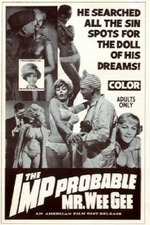 Wee Gee (real name Arthur Fellig) became famous for photographs that he took of murder victims and a few years before his death he got this movie. The "plot" centers around him about to kill himself when he falls in love with store dummy so he sets off to London to find her.

I honestly have no idea what THE 'IMP'PORBABLE MR. WEE GEE is trying to do. It's honestly one of the dumbest movies I've ever seen and it's also one of the most annoying because it never quite makes sense. It's not really a documentary on Fellig or something trying to tell his story. It's not really a nudie cutie, although there are some naked ladies in it. I'm really not sure what this movie is trying to do but it's quite awful.

Director Sherman Price is probably best known for JUDY'S LITTLE NO-NO and that film does seem like CITIZEN KANE compared to this one. The story is all over the place and the majority of the film was shot silent so we've constantly got a narrator telling us what's going on but even this gets rather confusing after a while. I'm guessing this is suppose to be a comedy but none of it is funny.

There are plenty of naked women who appear throughout but the pain of sitting through something so annoying means that no nudity is worth it. The only thing that saves this film from being a complete dud are the scenes in Europe. There are some terrific locations here and that alone is the only thing good that comes from the picture. It's worth noting that Sherman would end his career doing a documentary on Wee Gee, which I'm sure I'll get to eventually.