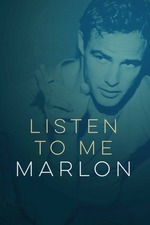 This is utterly fascinating. The audio is a little unclear at times but I could listen to Brando’s musings about life and art for hours. He offers a lot of valuable insight into his craft, while also revealing very dark, painful thoughts and experiences.

While the film goes through much of his life, it is not structured like an ordinary biopic. We get his own personal experiences of his career, and the documentary doesn’t get bogged down in all of his various films. Instead, it slows down for some of the most important aspects of his work and sheds new light on why he chose some of his roles, whether they turned out well or not. It makes sure never to use film clips for the sake of it - there is a reason for everything, a certain moment, a glance to the camera that helps visualise what he was thinking or what audiences rarely notice. Interviews clips and behind the scenes footage also help counteract the image of a ‘difficult’ or ‘crazy’ star. It’s great just to see him laugh and have fun with his colleagues and family.

Some of his most interesting thoughts arguably contradict the acclaim for his films. Like I myself thought, his ‘contender’ speech in On the Waterfront is good and all, but it’s not his best acting. It’s the viewer projecting themselves onto him and, in a way, overpowering the performance. Or when he says doing this is easy, not doing things is difficult - this is something I have always thought. Some of the best acting is so natural that viewers often dismiss it as doing ‘nothing’ because they are used to flashy, typically method theatrics. Subtle acting can make it seem like an actor is doing very little but actually accomplishing a great deal, and that’s hard to achieve.

The more intimate parts of his life are covered in a wonderfully artistic way. The visuals, the flow of the recordings and the tone of his voice make it all very poetic or even hypnotic. Happy, peaceful thoughts will suddenly shift into a darker territory, addressing tragedy in his life without exploiting the actor’s privacy. He discusses his parents and putting on a show for the world and how the cycle of abuse inadvertently continues and when you realise it can be too late. Or how you have to act a certain way to cover a sensitivity that the media will devour you over. Framed in a clever way that ultimately reveals the good reason why he has spent so long recording himself, this film reveals the tremendous passion, love, heartache and flaws that made up the man Marlon Brando. It’s easy to forget that he was a real person who lived and felt things just like everyone else.