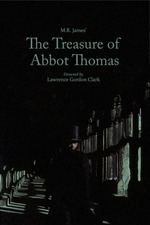 I've been watching a lot of BBC "ghost story" films lately. Many are quite short and as a recent bachelor, I can throw one on while I am having lunch and it's a pleasure. The Treasure of Abbot Thomas as one of the better films in this sub-genre (if we can call it that, I think we can). More of a mystery than a supernatural horror film, the quality of the direction, locations, and performances really open things up more than some of the other films in this series. It doesn't have that same minimalist, claustrophobic feel that films like Whistle and I'll Come to You, and The Signalman do. It's still creepy and atmospheric and when the scares do come, they deliver.

These feels a little bit fresher and more original than many of the other entries. I love the SLIME... I don't think that's a spoiler but I'll mark it as one.