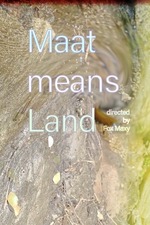 This film is currently free to stream as part of the new Prismatic Ground festival:
www.prismaticground.com/wave-2

"Fox Maxy’s short film Maat Means Land (2020) also trades in political and ethnic identity as a diffuse entity and language, though to a more extreme degree. His film is more than twice the length of Sanzgiri’s, and yet it is both a denser and more formally far-flung object, rife with rapid cutting and a refusal to establish fixed spatial and temporal dimensions. At near-breakneck speed, it cycles through images and sounds of downtime and of an overtly political dimension; of nature, its destruction—with scenes of wildfires—and urban spaces. The primordial and the modern are interlaced, as it deals with centuries of accumulated collective memory and pain, but there is also a palpably post-human aspect. In this regard, it has its own, distinct bent towards the exploration of digital textures. Slightly more retro than those that appear in the Sanzgiri film but still, all the same, jarring with some of the rougher, home-video-like footage. Certain sequences are backed and bordered with footage of an animated, alien terra, or else are inserted into a television prop in The Sims."
-Ruairí McCann

Pug Adventures: A Journey into the Reproductive System

Learning About Flowers and Their Seeds