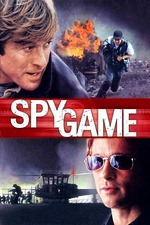 The great paradox of Tony Scott is that for all his notoriously comprehensive coverage it's often impossible to physically envision the environments of his movies in your head. Everything is on film — every angle, every object, every motion, every face — but the surfeit of visual information is overwhelming; rather than enlighten, the probing cameras and high-velocity edits distort. Spy Game cuts between a succession of U.S. misadventures — in Vietnam, in Berlin, in Beirut, and ultimately in China — and the place of their origin, at CIA headquarters in Langley, and strangely I have a better sense of the expansive international locations than I do the layout of the conference room where roughly half the movie takes place: where is the dark and shuttered cameraroom recording all this action? Who else is in the room besides Dillane and Redford? How long is the table, where are the other doors? The conference room is what is happening — the other scenes are recounted memories of the deeply untrustworthy Redford — and yet it seems further away than anything else.

Scott likes heroes who can do what he is asking of his viewers — people like Redford here, or Hackman in Enemy of the State, who can parse the feed in all its terrifying fullness, distill the essence undistracted by the excess, and extract something they can use. The CIA's inability to do so in Spy Game — the powerlessness of the organization's middle managers to process the information they have and are given — is its fatal weakness, as Redford ultimately turns the glib charm that wreaked havoc across multiple continents on behalf of the CIA against the institution itself.

LOL btw at the idea of a human rights terror cell