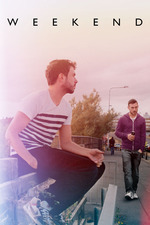 "Gay people never talk about it in public, unless it's just cheap innuendo."

The film's thesis, if it has one, is stated near the 2/3 mark between the two main characters. "Because they shove it down our throats all the time, being straight. Straight story-lines on television, everywhere, in books, on billboards..." It doesn't take long consuming media while being gay before realizing that straight people - at least the ones making our media - don't care about us or our stories. Sure, we're included on occasion, but it often feels like simply checking off the Diversity Checklist, and the portrayals are less than flattering: the GBF with the limp wrist and the shopping bag, the butch lesbian with a talent for wielding power tools, the bisexual person who is often painted as merely "confused," or, perhaps worse of all, the homophobe who turned out to be Secretly Gay All the Time, or, even worse, Cursed With a Gay Child (I don't think people realize how offensive that is: basically handing out my sexuality and my identity as punishment, or, in the case of the homophobe's gay child, wishing an already confused and vulnerable child into an abusive home). Everywhere we turn, there they are: straight couples on television and movies and books - walking down the street feels like attending the Straight Pride Parade homophobes so annoyingly insist should exist. And then, when we speak up and complain about the lack of representation, we get accused of shoving our sexual orientation down their throats? We're told that we're becoming Too Gay, and why can't we just realize that not everything has to be about gay people? To which I would reply: why does everything have to be about straight people?

Weekend seems to be very interested, if not obsessed, with the idea of heteronormativity, and how straight people ignore gay people until they assimilate into the heteronormative society (assimilation or isolation, those are the two options). At multiple points in the film Glen and Russell mention that straight people don't care about us. While talking about his art project, he says, "The straights won't come because, well, it's got nothing to do with their world. They'll go and see pictures of refugees or murder or rape. But gay sex? Fuck off." And later, in one of the funnier lines of dialogue, "We mustn't upset the straights. Shh. Watch out. Straights are coming." It seems to attack the idea that as long as we stay in our clubs and our dating apps and quietly watch RuPaul's fucking Drag Race alone and only discuss gay sex in the aforementioned cheap innuendo, they'll be fine with it. But the second we speak up, we're either shoving our sexuality down their throat, or something as innocent as holding your partner's hand in public becomes this Beautiful Political Statement. All the while, we just want to be. That's certainly how Russell and Glen feel (though in different ways), and it's without a doubt how I feel, so it was really easy to connect with Weekend.

Weekend is in many ways your typical low-budget film-festival movie, but it accesses this kind of true human expression that elevates it far beyond what it could have been. The acting is amazing and true (though no one besides the two principals has a lot to work with), the direction is steady and balanced, the screenplay beautiful and evocative. It may be a bit slow-moving for some, and the plot leaves a bit to be desired (in addition to being predictable), but the execution of Weekend was simply too great for me to ignore.

Am I biased? Yeah, I am. If I watched a movie about straight people falling in love over a weekend, my review would read a bit like "You barely know each other, get the fuck over it." But the development of this relationship felt real, if fast, and I felt a genuine connection between the characters. Their chemistry is true without being obnoxious, their banter witty without feeling fake, and their rough patches feel genuine without being so rocky that it's melodramatic or impossible to stitch up. It manages to tell a personal story of two men in love while also commenting on societal perceptions of homosexuality. It can be funny, daring, sad, heart-warming, alienating, even a bit erotic during its sex scenes.

Once again, I continue to project my own personal experiences and emotions onto gay movies, but, as I've said before, divorcing movies from the personal meaning I attribute to them ignores what I love about watching movies in the first place. So, I am biased, but biased I will continue to be.