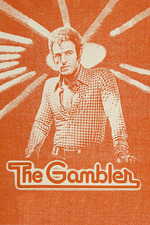 Of the as-good-as-the-locations NYC supporting cast (including Melanie Mayron and Lawrence Hilton-Jacobs, both unbilled), I was most fascinated by London Lee, who plays the Florida-tanned bowl-cut decadent nasal-voiced wiseguy The Monkey. ("You wanna fuck my girlfriend? Sixty bucks, but for you it's free.") London Lee (née Levine) was a Nice Jewish Boy standup comic with a dad in the garment business, who loved the validation from telling jokes so much that he was able to stop going to therapy five times a week. (One of his signature jokes: "Rich kids bored me. I wanted to play with the poor kids. So my father said he’s gonna buy me a ghetto. My mother got really scared. She told him, Just make sure it’s in a good neighborhood.") Peep a couple of his somewhat dire Ed Sullivan appearances:

I see in Lee something of the buttoned-up apple-polishing class-clown Semitic style of his contemporary Allan Sherman—who, like Lee, had a messy personal life offscreen. Lee's indelibly sleazy appearance here is maybe a sequel to his standup, a payoff to the repressed Jewish momma's-boy Id that Lenny Bruce and Alexander Portnoy were blowing open as he was doing stale Borscht Belt bits.

Which is, of course, the movie in a nutshell.

Or, to put it another way:

In the early 2000s, when James Toback chatted up my friend in Central Park and tried to convince her to let him film her taking a shower, the number he forced into her hand was his mother's. "Call here and ask for James." I can't swear to this part but I seem to recall that after she turned down the invitation to, I guess, film an audition for When Will I Be Loved, she also turned down an invitation to come over to James Toback's mother's house to eat matzoh ball soup.