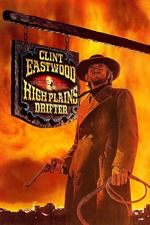 My first thought when watching this:

There are two kinds of “revisionist Western” that feel honest and just. You can deal directly with the genocide of Native Americans, or you can deal with it metaphorically.

Movies in the latter category often address the sin and shame of the West by casting the frontier (for white settlers) as a purgatorial waystation, where the corrupt are absolved through suffering—or as a Hell, where the irredeemable get what they deserve.

Eastwood scouted several locations himself before choosing Mono Lake, near the crook of California’s elbow in that high, cold, blue-toned wilderness east of the Sierra Nevada range. It’s a beautiful but fundamentally inhuman landscape, because God’s country is not fit for men to live in, and geologic time is inhospitable to the quick rhythms of warm-blooded life.

The lake, an uncanny mineral-blue, is glassy and lifeless, with pale rock formations curling out of it like corroded finger bones. The sky is too blue, too; the void is closer. The Sierras loom behind, their jagged edges frighteningly sharp in the thin air.

The real-life boomtown of Bodie (now an exceptionally well-preserved ghost town) was near here, on the Nevada border. Bodie’s productive silver mine briefly created an average per-capita income that looks like a statistical anomaly, plus multiple nightlife districts and a well-earned reputation for violent crime.

Anyway, everyone in this movie is dead, drifting through a lifeless landscape or trapped in it to suffer.

My second thought when watching this:

You couldn’t make it now because the red paint against the blue sky just wouldn’t register with contemporary wash-out color grading. The entire third act would be visually worthless.