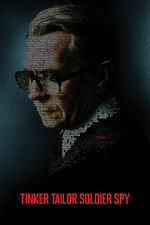 My thoughts during this film probably say a lot more about me than the film, but they started with "hasn't Gary Oldman got REALLY old all of a sudden?", then turned into "ooh it's Sherlock, it's Sherlock!" and ended up with "Mark Strong is pretty much in all my favourite films". This is now one of them.

There's something about spy films that I love. The mystery...the intrigue...the romanticism of it all stirs my soul. I think the modern Bond films have this in translation to the Mission Impossible epics that they now are, and so it's nice to see something like Tinker Tailor get back to good ol' espionagey (that's right) basics. It's all very secret, all very bloody British, and it hooked me from the get go.

I've not read the book or seen the previous film, but I intend to pay a visit to both in the near future., as I'd recommend this film very highly!

(...of course, it isn't Gary Oldman. It just looks like him a bit, if you squint)