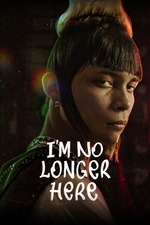 i'm no longer here tells the story of ulises, a cumbia dancing mexican teenager who flees to the united states after having a dispute with a violent gang. with his life and his family threatened, he leaves the barrio, but the barrio never leaves him.

it's an extremely unique coming-of-age flick, that perfectly portrays themes of alienation, homesickness, and identity.

the narrative is captivating, with its slow-burn pacing and constant jumps in time, deep sociopolitical commentary and depiction of people with all sorts of cultural backgrounds.

but it also feels deeply personal, with its characters and situations being strangely familiar (even though i've never even met an actual kolombiano), its long beautiful takes, that sometimes are so close they're suffocating, and others so open they make you feel lost in the cities it depicts, whether it's monterrey or new york. it really shows a contrast between violent and non-violent gangs, the life in northeast mexico and northeast u.s., and the struggles a young migrant goes through.

overall, it's an exceptionally atmospheric film. with camerawork dripping style and uniqueness, and a script that makes you care for our protagonists while at the same time giving a spin to the tropes of the genre. extraordinary filmmaking, that serves as a proof that mexico has great stories to tell.

this is the type of films that i crave get produced and distributed in my country. films that break the mold and tell heartelt stories, where there's true talent and effort behind. i'm so glad streaming is serving as a spotlight for filmmakers like fernando frías, to whom the local industry has turned its back. i hope this gets the praise it deserves, in festivals and by viewers equally.

go stream ya no estoy aquí! i cannot recommend it strongly enough.