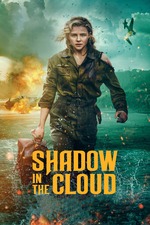 Frankly, I was hoping for something different, but basically, Shadow in the Cloud, ends up being a mixture of attractive ideas, but unluckily doesn't manage to land any of them gracefully.

Much of its short duration deals with Chloe Grace Moretz locked up in a small cabin listening to her male companions making sexist jokes about her, to of course give a social message about feminism, while at the same time, with her in there, we have a small subplot that copies Nightmare at 20,000 Feet from The Twilight Zone, to then become an action film in its last 25 minutes.

Like I said, it's a strange mix, but hardly outstanding or rewarding.

I liked the soundtrack though.