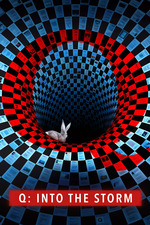 Q: Into the Storm

I cannot say much beyond what I've seen for several years on Twitter, and more than anything from what I learned in this documentary miniseries, but in a way it reaffirms what I always thought about QAnon since it began to become something more mainstream, and that is that they deceived millions of credulous people by something that seems to have been created for ego, money and business, and that it ended up being used by many opportunists, including Trump, in order to launch and maintain their political agendas.

It lost a lot of points for spinning around unnecessary things, especially the constant twists and turns of the Watkins' narcissism.

Besides that he could be more concise and to the point.
Beyond that, it's fine for those who don't really know much about the subject.

WeWork: or The Making and Breaking of a…