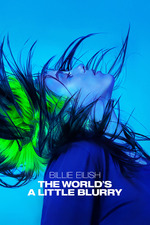 Regardless of what opinion I may have about her music, the existence of this documentary is understandable.
After all, as it tries so hard to demonstrate in its excessive 140 minutes, the story of Billie Eilish is one of inordinate success and an increase of frenzied fame.

However, and I'm sorry, because there is a big but, that is why the documentary exhibits the weakness of its own theme and subject.

What I mean by this? Quite simple: her story could be an excellent subject for a coming-of-age movie. A 16-old girl creating and producing music with her older brother in her bedroom and then becoming a superstar. Who wouldn't like that story?

But being a real person who has only released one album, which while it has been enormously successful, that does not mean transcendental.

The true test of Billie Eilish, and which by the way would've been a better documentary, is the challenge of her sophomore album, because that's where she will show whether she was just a momentary hit, or an artist who's here to stay.

Leap of Faith: William Friedkin on The Exorcist