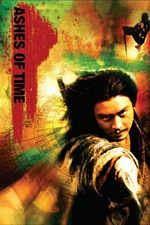 Probably Wong's least penetrable and most highly stylised film, a deconstruction of the Wuxia picture with a fragmented narrative, cranked-up colours, Wong's trademark romantic longing – and, somewhat hilariously, fight scenes choreographed by famed martial artist and Jackie Chan collaborator Sammo Hung that are shot so expressionistically by Christopher Doyle that it's almost impossible to tell who's hitting who or what the hell is even going on.

There is an achingly beautiful scene with a woman and a horse that reminded me of Joan Allen running her hands over the tiger in Manhunter; a series of close-up shots of pale hands on hide, ending with the woman's hands clasped gently around the horse's neck as she drapes herself along its back. Like Gong Li's dress in The Hand the horse seems to stand in for a lover who is impossibly far away. We never really find out much about this woman but it hardly seems to matter – it's more about the vibe, and I respect it.