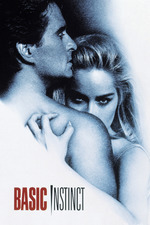 One of the greatest things about Paul Verhoeven's Basic Instinct that it doesn't matter who the killer is; the entire movie you've been given the equal number of evidence against and for Catherine Tramell's (played by Sharon Stone) guilt. The story of this movie does not rely on characters' personality or choices, it's simply messes around with us, trying to disorder our stream of thought just like Catherine manipulates Nick Curran.

The movie starts off with the scene of the killing where you're almost certain about the identity of the killer but because you never see the killer's face Verhoeven manages to keep a bit of doubt in your head, and basically he uses the same trick throughout the entire movie in different forms.

When Sharon Stone's character appears for the first time she grabs the movie in her thighs and makes every movement in it dependable on her. Even the interrogation scene where she is being questioned she doesn't feel vulnerable or even pressured a bit, and at the end of the scene she's the one who is questioning Nick and have a total control. I think if I will be asked who is the best femme fatale I would answer that it's Catherine Tramell; she's the epitome of a cold goddess for whom controlling men is not harder than breaking an ice with an icepeak, add to that she's brilliantly portrayed by Sharon Stone and you have the best femme fatale ever.

Of course this movie belongs to Sharon Stone but also to Michael Douglas; it's a joy to watch how he goes crazy and falls for Catherine as well as the audience does although both understand that she's nuts and clearly manipulating both him and you.